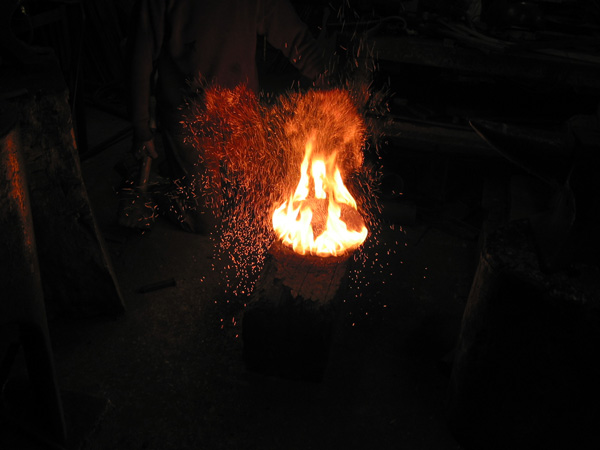 Us and Iron (or Iron, the universe, and everything).
Iron is a major component, literally, of our world, even of our solar system.
In the ‘Red Giant’ stage of what we understand to be the life cycle of a star such as our Sun it is the production of iron that marks the final stage of nuclear fusion and is apparently the trigger for the catastrophic collapse of the giant star; a collapse that leads to the most violent explosion known in the universe – the supernova. And it is from the iron rich debris of that explosion that a solar system such as ours eventually coalesces.
As a result here, on our own Earth, the planet core is composed almost completely of iron while the accessible crust is abundantly rich in iron ores. It is unsurprising that, at the most basic, biological level, iron is also crucial to the well-being of most of the life that the planet has fostered, both plant and animal.

That this iron should also have rather more than a passing part to play in the story of the life form that has curiosity as it’s default – and a prehensile thumb to boot – makes for an intriguing contemplation.
It would seem that we first caught glimpses of the potentials of iron well before we had learned how to extract it from the Earth, in finds of meteoritic iron; the Sumerian and Hittite words for iron – an bar and kuan – both mean fire from heaven; the Egyptian, Hebrew and Assyrian words we understand to have had similar meanings – heavenly thunderbolt and metal of god /heaven – while nickel rich iron artefacts have survived in some quantity that we can now date as belonging clearly to the Bronze Age.

The gods were trying to tell us something, and I suppose it is fortunate that we cottoned on relatively quickly for if they had found it necessary to continue to satisfy all our industrial iron requirements by thunderbolt the earth’s surface would indeed be a dangerous place today..!

A nod may be as good as a wink to the proverbial horse but the Iron Age to which we were thus beckoned could only really begin once we had understood and mastered the processes of reduction that are necessary to release our own native iron from it’s earthy matrix; how this eventually happened is uncertain, but happen it did; and however it happened the effect was the same; our desire to unwrap and play with this beguiling, earthbound, gift as quickly as possible grew with every layer of wrapping that fell from it.

Native iron would at first have been wrung from the rock with the greatest difficulty, and the processes would for a long, long time, have been agonizingly slow, deeply misunderstood, fraught with effort and dogged with uncertainty and failure.
This must have at first applied to both the extraction of the material and to the craft of it’s subsequent working, but it was soon clear that the stakes were high; no less a thing was on offer than raw power – initially we could perhaps only harness enough to give us a slight edge over nature, but soon we were also accessing the power to dominate or repulse our fellows and to shape the world around us to our desire– and with such an incentive it was only a question of time before we devised methods and means of ensuring a plentiful supply of this world changing material.
For a long time the blacksmith was central to this evolution. From the simplest hunting and agricultural ironware, through the arsenal of weaponry that the material so readily suggested to virtually every major culture on the planet, on to the magnificent architectural and ecclesiastical works of the mediaeval and renaissance European smiths… the smithy was where it nearly all happened, the respectful hand of the blacksmith was behind every line and every detail of pretty much every piece of worked iron in existence.
This period of the smith’s dominion over all matters ferrous is referred to in numerous folk tales, parables, and stories from all around the world. Within the various western traditions and mythologies we have Tubal Cain, Hephaistos,Vulcan, Reginn, Wayland, Ptah, Goibniu, Saints Eloi and Dunstan to mention but a few. Folk tales abound in which the smith figures prominently either as hero or villain, reflection perhaps of the mixture of suspicion and respect with which the early practitioners were viewed by their fellow citizens….and this seems to have been the case across most cultures.

The arrival of the Bessemer process, along with the accompanying zeitgeist of expansion and industrialisation, marked the beginning of the end of this hands on phase of our relationship with iron, and resulted in such an increase in production capacity that the sinews and skills of so few individuals were eventually no longer sufficient for all that was demanded of them. The engineer, the industrialist, the scientist and the designer were now to have their day in the sun, while the smith found himself relegated to the shadows, ekeing an existence ever more on the fringes. The science and the machinery, that were the hallmarks of the Industrial Revolution, tilted the balance of power between ourselves and the material drastically in our favour, putting us firmly in the driving seat. We were, almost at a single blow, free to realize our dreams in iron, and to do so with less and less constraint, as discovery and improvement piled one on top of the other.

150 years on countless alloys and grades of steel exist for every conceivable purpose; we have developed forming, machining, cutting and handling technologies that occur at the click of a mouse and the shuffle of a distant gopher, while a plethora of welding processes ensure that pretty much any connection or confection can be realized, as directed. We understand in depth the composition of the metals we use and can control all aspects of our manufacture by specification and design. The working and forming of metals has now become a realization of calculation and is mainly accomplished, by proxy, at multiple removes from human hand or eye… Indeed, it would seem that we have completely mastered this material mathematically; this mastery is evidenced all around us in the proliferation of metal objects with which we are surrounded and in the carefree way we specify and use metals at every level of our material lives today.
Where then can the blacksmith, once such a mighty mage, such a kingpin, find a corner to set up forge, to still be of use?

I would put forward the (rather unoriginal) thought that our 21st century mastery of iron is in fact a mastery of numbers; capable, under benevolent direction, of impressive creations of great use and mathematical beauty (and under the wrong direction of the most dreadful destruction and direness).

Lacking however in both cases is the human touch; the forging of iron by human hand stands proudly as a plastic art in which the imprint of the hand behind the hammer is as vital and unique as the potter’s thumbprint, every blow to the hot material leaving an inimitable mark, every manipulation, however calculated and canny, being in effect intuitive. These are certainly things that we can value; antidotes perhaps to the sterility of the digital world, vibrant expression of human impulse and vision, conduit for a primordial connection to the basic stuff of our universe.

What is more the craftsmanship, skill, and ingenuity of the smith has accumulated over these millenia a huge reserve of tradition and knowledge which we should truly regard as treasure to be cherished, husbanded and passed on, even if the original underlying imperatives have faded away.