Outline of equipment and processes, as found at our workshop 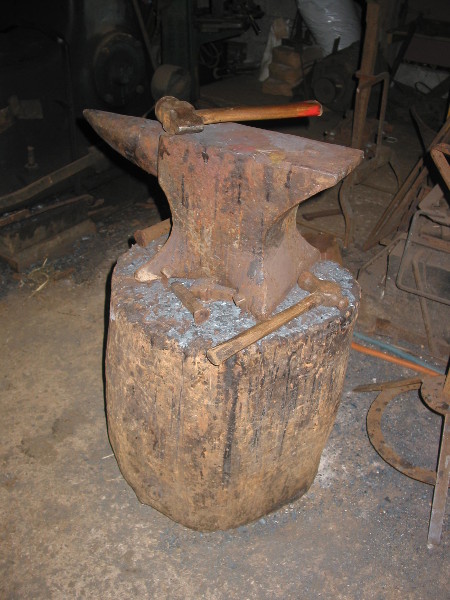 The Forge or Hearth.

In order to master iron heat is the smiths most essential ally. It would probably have been around the camp fire that mankinds’ early realisations of the possibilities of metals were made and it is upon fire, and its’ mastery,  that this most ancient of  crafts still depends.

My definition of the blacksmiths forge would be something like this; –  a hearth that allows one to produce enough  heat to bring the work piece up to the required working temperatures without damage.

‘Enough heat’ – Welding temperature, which can be regarded as the maximum necessary heat for the  forging of iron, is around 1380 degrees C.

‘The work piece’ – The shape and form of the materials used and the length of heats to be achieved  will influence the physical layout of a particular forge.

‘Required working temperatures‘    – While iron can be worked hot as of about 750 degrees C; most forming operations take place between 850  and 1200 degrees C.

‘Without damage’ – this refers to the fact that coal can generally not be used for forging processes due to such characteristics as its’ sulphur and phosphorus contents. When I first started it was still just possible to obtain ‘smiths coal’ – a bituminous coal in a very fine grade – but the realistic options today, in this part of the world, seem to be limited to coke or gas.

Our own arrangements are as follows; We have one substantial coke forge – for larger work and higher heats, one ‘step through’ propane hot box – for the everyday and lower temperature work, and a small brazing table – for the small and the occasional. We also make regular use of the oxy propane cutting torch and various sizes of heating torch. 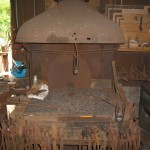 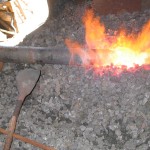 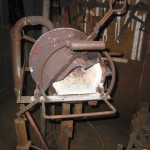 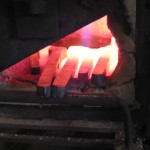 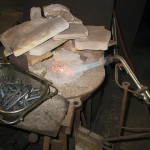 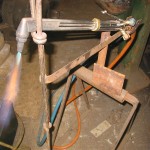 Under construction we have a larger highly insulated propane furnace with a preheated air supply with which we hope to attain welding temperatures in a relatively neutral atmosphere. 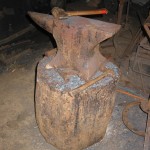 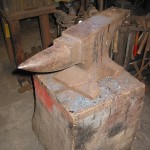 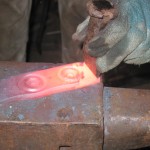 I  think of the anvil as the thumb to the hammers’ fingers. It seems almost derogatory to liken it to a single digit – even a prehensile one – but the beauty of both the thumb and the anvil lie in their simplicity while their effectiveness lies in their relation with their counterparts, be it fingers or hammers.

The anvil provides the equal and opposite force to any hammer blow that you put to it;  its’ cunning shape alone offers the smith all the basic forming options while it goes on to provide all manner of other services through the tools that can be held in its’ ‘hardie’ hole.

In addition to our two main anvils our workshop is scattered  (it would often be more accurate to say littered)  with other forms of anvil. There is the swage block and then there are a selection of stake anvils  (variously shaped heads on iron stakes that are normally  set up in blocks of wood ) , a jewellers’ anvil , a number of hand held dollies ( originally for panel beating and such like, but we find plenty of other uses for them). In addition to the anvils there are the hand tools to go with them –  punches and drifts of different shapes and sizes, chisels, forms etc  and then an array of jigs  and patterns, forms and cunning devices for different purposes. 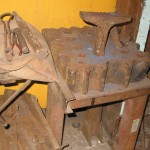 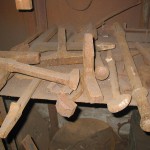 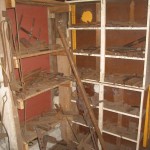 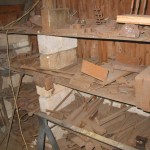 There are also a variety of large lumps with sticky out bits which spend most of the time getting in the way but, when they are needed, are completely invaluable. 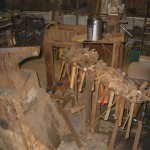 The hammer rack is a thriving affair, packed with all shapes and sizes.

There are a few trusties and favourites – I have one, quite large, hammer that I tend to use for nearly all forging operations and then a couple of smaller hammers for rivetting and so on – but all the hammers get used, mostly for the sort of work for which they were designed.

When it comes to working away from the anvil things need to be held securely. So there are a number of vices around the shop and outside we have the ‘ton block’  – a five inch deep cast iron rectangle with holes through it salvaged from Philips shipyard when they closed down (they had a whole large hangar floored with these blocks which were used for the laying out and forming of large shaped steels); an immovable object is very useful from time to time…. 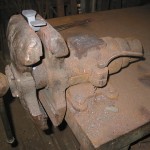 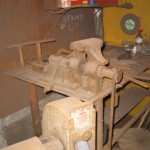 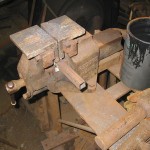 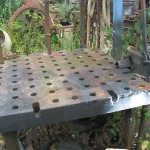 For the heavier and more arduous operations we have various mechanical aides to hand. We rely heavily on our air hammer for many operations and, over the years we have devised a whole tool holding system for it that allows us to make all our own tooling in house.

The spring hammer is less frequently used but when it does get going its machine gun rattle can be heard from some distance as it makes short work of bundles of tapers and other such jobs. 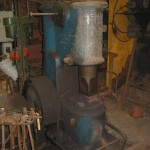 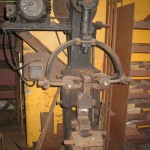 Then there is the hydraulic press;  under the hammer things can be a little bit exciting, sometimes. The press, being a much slower acting machine, is much less stimulating but equally effective and a lot more controllable. 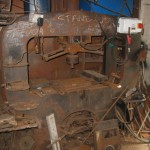 All these larger machines require three phase supply – which we don’t have – and so we run it all off  a generator. we have had various phase converters over the years but we find the generator is a more reliable, if slightly less convenient, solution. 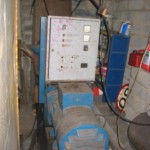 As a rule we will outsource any proper machining that we need to get done; however it is convenient to be able to do  the simpler tasks ourselves. To this end we have a basic machining capacity with both lathe and mill; I feel sorry for these two bits of machinery – what a place for them to spend their retirement! Still, mid 20th century British Engineering seems to be up to the challenge and they continue to deliver in spite of the very un ‘engineering shop’ nature of their surroundings. 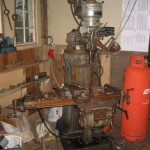 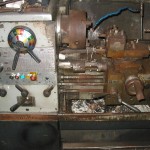 I trained as a welder and this may well be the underlying reason for my reluctance to get involved with fabrication in a big way; however it is necessary to have fabrication capacity even if it is only for the making of jigs and tools. Inevitably a part of our business involves repair and small fabrication jobs and so we have a separate area for this sort of work as well as a room for the plasma cutting side of things . 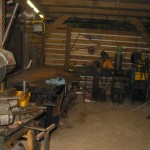 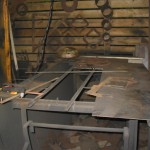