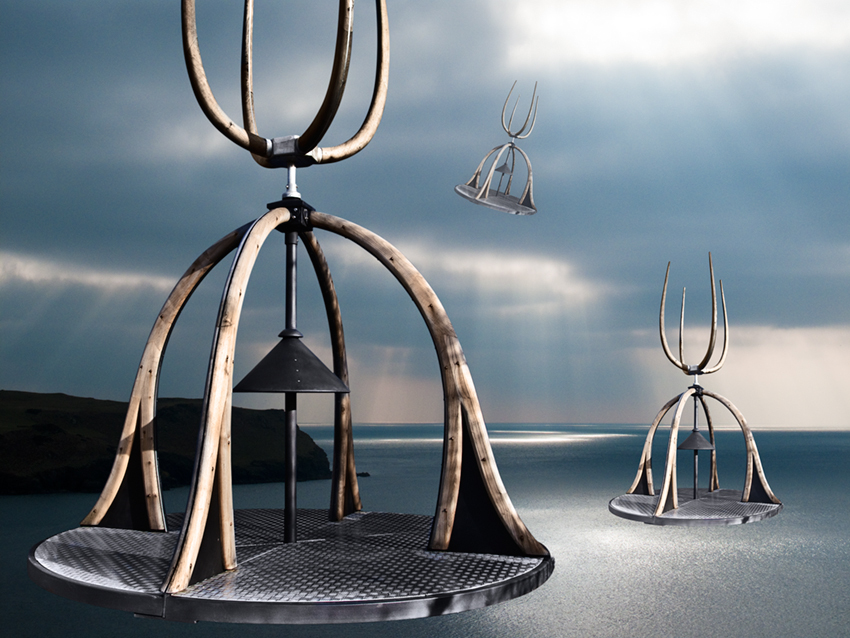 I am generally fooled by most illusions. Sometimes  just the first time, but usually on numerous occasions, and, sadly, in some instances, always. So the idea of using an illusion as an educational tool rather runs against the grain of my personal experience. When I was first approached by Mr  Lotto with his proposal for this most educational of illusions I must therefore admit to a small degree of scepticism.

On this occasion of Beaus’ first visit to the workshop he showed me on his laptop various virtual illustrations of the basic concept or principal of this particular illusion;    although I completely failed to reach the point where I could choose to see a reversal of the direction of rotation, I did become interested to the extent  that  by our next meeting a few weeks later, I had designed and made the 12 inch tall maquette below; 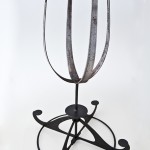 The proposal, or challenge, as far as I was concerned,  was to illustrate on a large and unmissable scale certain peculiarities of the way we perceive things. The peculiarities  which were to be thus highlighted are to do with the way in which we interpret the sight of vanes rotating on a vertical axis.     I will leave to Lottolab (address at the bottom of this page) to deliver the science behind this and  to draw any conclusions from it.

The original concept had involved a ‘whirlything’  (the only description that has so far seemed to work) being an installation on a school(?) playground somewhere , or possibly at ‘Lottolab’ itself, in London. It was to incorporate some form of seating.      My maquette, given that the end product was to be around 5 metres in height, also explored the aspect of mounting and dismounting the mast and of making the whole structure so that it could be erected and transported with relative ease;  my personal opinion was that it would be most interesting and viable as something that could be moved from one site to another. 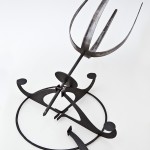 Having made the model (and established to my own satisfaction that it was possible to see the required illusion!) we now had to step bravely into the ‘illusion deserts’  that are engineers’ calcs,  costings and health and safety requirements…….

The effect of this leg of the journey upon the design was that the seats disappeared and the frames got taller, the grabwheel became conical and the need for a floor became apparent. Details were subject to engineers scrutiny (Kate Purver of Jane Wernick Associates) and this entailed some minor but important alterations but, in most  respects, the more intuitive approach, that had characterized the earlier stages of the design, was not too far off the mark.

I was interested, from a project that |I had been working on for myself at the time, in the structural use of timber and plate metals together and  suggested that we explore this combination in the design of the whirlything. Below are some views of the first assembly of the whirlything, prior to surface finishes and wood cladding; 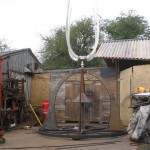 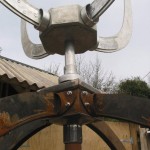 And then the first assembly after the initial wood cladding operations (by Nick Kary); 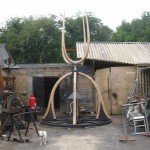 A wooden sub floor then had to be made; 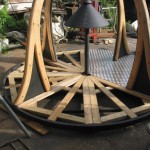 So that the aluminium chequer plate deck could be laid down; 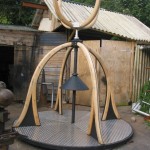 And then there was a long pause……. A(n unspecified) number of months passed while the whirlything matured and settled. The workshop chickens began to eye it up as a potential roost and the occasional passerby would find themselves moved to enquire politely as to the purpose of this strange creation.. For the sake of variety the answers began to drift further away from the cover  story until its’ function would switch from crop circle making device to intergalactic wormhole polisher etc. It acquired various names – the schtroumpfensplatter,  the schnurdlewanger,  the twirleekissangel  to name but a few and we were beginning to explore its’ various possibilities in more detail; 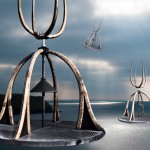 So it was something of a relief from the pressures of an overactive imagination to finally receive the call that it was to be installed ASAP in the playground of a local primary school, prior to hopefully embarking upon further school visits elsewhere. 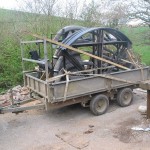 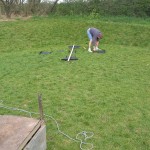 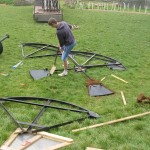 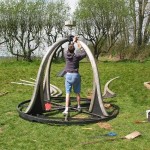 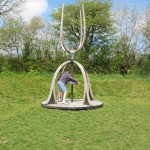 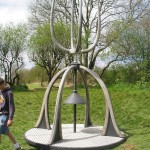 Hopefully, in this role, it will provide both a light hearted stimulus for creative activity for the children as well as fulfilling any more scientific and serious functions.

Time, I suppose, will tell.

In any event, I’m just really pleased to get the workshop front yard back!

This project involved the following collaborators

and was funded by the Wellcome Trust at      www.wellcome.ac.uk

The first installation is at Blackawton County Primary School in South Devon,UK