The Blacksmith and the Tailor 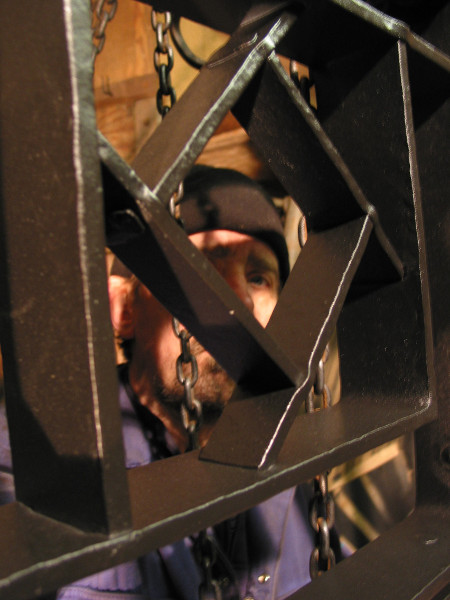 THE BLACKSMITH AND THE TAILOR.

(or ‘an apology for dodgy tassels’)

The king wanted to have a new castle built for him and so he called together the best craftsmen in the land and told them that, when this castle was finished, there would be a great feast and the man who had done the best work would be proclaimed the Father of all Craftsmen.

The craftsmen built him such a magnificent castle that the king found it quite impossible to decide who had done the best work; worried that to choose one craftsman over another would be unfair and cause jealousy he tried to make a joke of it by giving to his tailor the grand title of Father of all Craftsmen, even though everybody knew that he had had absolutely nothing to do with the building of the castle.

While the tailor was delighted with his new title, there were others who were not so pleased. The blacksmith in particular was angry; in fact he was so furious that he stormed out of the banqueting hall there and then and, going straight home, took to his bed in the blackest of black sulks.

The following day his customers found his workshop closed, as they did on the next day, and the next, and so on…….; by and by the mason began to need new chisels; the carpenter his saw repairing; the gates to the new castle couldn’t be put on properly because they needed new nails and the kings horses couldn’t be shod. The kings soldiers needed their swords sharpened and their spears and shields mended, while the castle cooks couldn’t cook the king his favourite stew because the chains to hold the pots over the fire had broken. Even the Father of all craftsmen, the tailor could not finish off his work for the king because his best scissors had snapped.

No amount of shouting and banging at his front door would persuade the sulking smith to come down to his forge. Their threats and promises were all answered with the same sullen silence from the bedroom window, and so finally the king and his craftsmen broke into the forge, having decided to try and do the work themselves.

This did not go well; they burnt the iron, they burnt themselves, they broke the tools that they were trying to mend, frightened the horses with their clumsy attempts to shoe them and finally managed to knock the anvil off its stand and break it in two. At this moment who should walk in but the blacksmith himself; with him was Saint Clement, the patron saint of blacksmiths.

The king, who had finally begun to wonder if all this trouble might in fact have been caused by his little joke about the tailor, was quick to apologise to both St Clement and the blacksmith saying; I have made a great mistake in my judgement on this important matter and, in justice to the blacksmith, without whom we clearly cannot manage, I hereby proclaim him Father of all Craftsmen and he must come as my guest of honour to a Banquet tonight (once he has repaired the chains for the cooks, that is)

The blacksmith was of course quite pleased with this result as was nearly everybody else, for it meant that they could get back on with their business as normal. Only the tailor was unhappy and, being a rather spiteful (but, fortunately for the blacksmiths posterity, unimaginative)| man, crept under the banqueting table that evening with his newly mended scissors and snipped a fringe of little pieces out of the blacksmiths apron as he sat to his feast by the kings’ side.

Remembrance of this important, if legendary, occasion has been put forward as being the reason for the tasteful tasssely fringes with which some smiths will still decorate their leather pinnies to this day; the impulses that drive us are sometimes hard to identify and so I suppose this has to be as good an excuse as any, hopefully sufficient to guard against any suspicions of vanity or foppery such as might well be imagined from contemporary cinematographic renderings of the blacksmith…”Blacksmith’s hands” etc etc