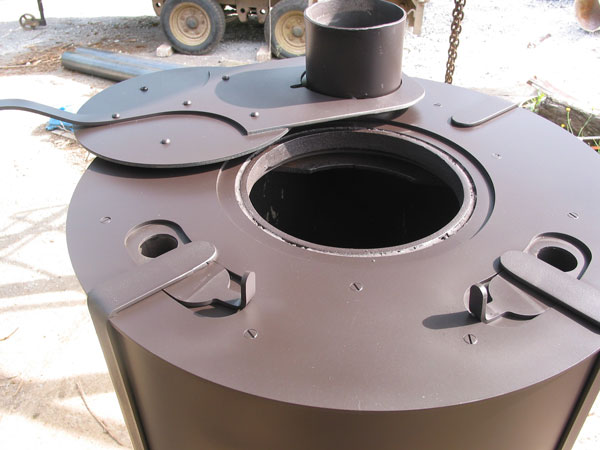 The intention was to produce a sawdust burner a step larger than the larger commercially available burners, but using the same top draught system.
I used 4mm mild steel for the barrel and a two layer steel sandwich, total thickness 10 mm, for the top plate. The construction aimed to achieve as much as possible by the use of laser cut profiles, and the barrel was also rolled by others as this appeared to be the most cost effective route. The legs run the length of the stove and hold the top down also, by simply being bent over at the last stage of construction. Diameter is 600 and height 1250.
Having made the stove it was lent to a small joinery workshop and installed and run for a period of 3 months

The deficiencies that revealed themselves were as follows;
The stove was too high for easy loading and this was made even more awkward by the fact that the top opened upwards.
The back flue meant that the installation of flue pipe in the workshop, which tended toward the ramshackle in any case, was distinctly dodgy.
The top was too thin for its diameter and distorted the first time there was a really hot fire. This meant that control of the draught became impossible as the fire could suck a fair amount of air in through the ill fitting surfaces.

Pictures of prototype 1 prior to testing and consequent modification 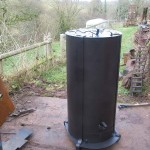 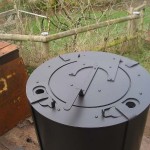 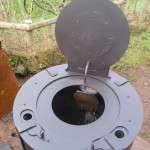 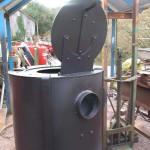 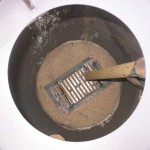 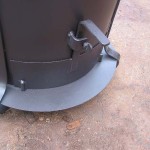 Also, the angle of the air inlet tube meant that the fire tended to burn to one side as it would track along the tube.
The footplate arrangement tended to capture spilt sawdust, and the area underneath the stove similarly became home to much debris.

On the plus side the stove worked very satisfactorily in all other respects. It would burn all day on one charge, would deal happily with any other bits and pieces that were put in it and lit and warmed well. The barrel showed no sign of distortion even though it had been brought to a localised red heat at one point, (though this did scorch out the hi temp paint in that area).

After the trial period I had the stove back in the workshop and re made the top using refractory firebrick sandwiched under the top plate to prevent distortion.  The height and the rear flue I left unaltered and the stove was sold on to the workshop where it had been trialled at cost.

The next version, illustrated below, needed to address the failings found in the first, and so is shorter (but a bit fatter in order to maintain the capacity), has a top flue and a sideways opening lid, sits on a conical skirt rather than legs (thus taking any spillage away and stopping the build up of debris underneath), has the air supply tube making the last bit of its journey vertically along the approximate centreline of the combustion chamber and has a substantial firebrick sandwich for the top plate. 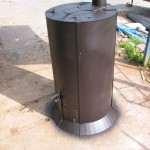 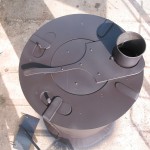 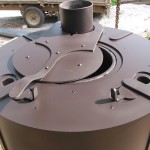 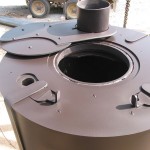 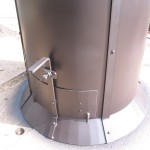 conical skirt base for ease of handling and safety against spillages 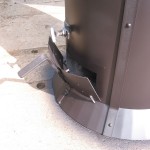 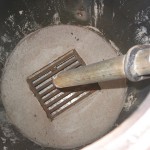 Possible future additions / improvements could include the provision of a loading hopper and some form of simple riddling/poking tool.

I also think there is potential for this size of stove to double as an incinerator and to have a simple copper or stainless tubular coil or water jacket which could be linked to an accumulator or in some other fashion tied in to a hot water system.