A pintle in the making. 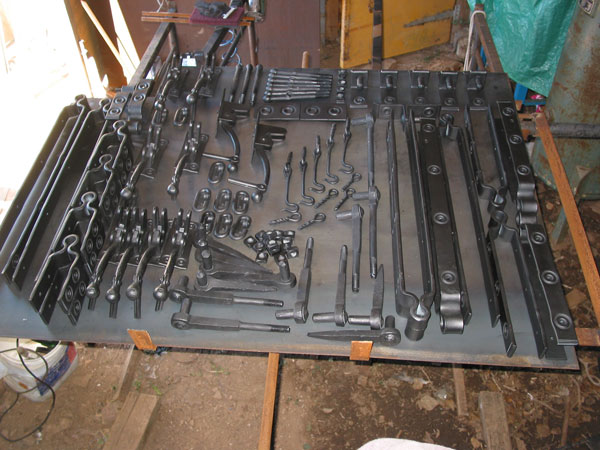 This series of images that follow show one method of forging pintles, as seen in various formats in the front centre of the image above. The job could, of course, be done in many different ways;  today it would be generally done as a straightforward fabrication;, for example, by electric welding a piece of rod to a piece of flat bar which has been flame cut to the required shape. I think that the blacksmiths’ method, of which this is but one possibility,  not only produces a more attractive result  (in this instance by a clear mile)  but will also tend to give the finished article a structural integrity which can easily be absent from the mass produced , fabricated article.

If I remember correctly we did this particular batch of pintles this way because the knobbing contraption seen in the first of the pictures below was already set up from a previous job. 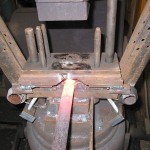 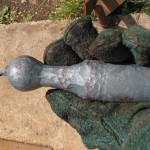 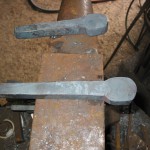 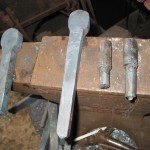 tenoned pins and their bearers 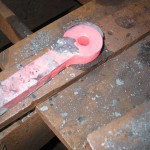 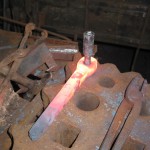 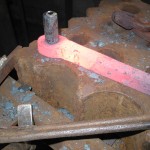 pintle in the making 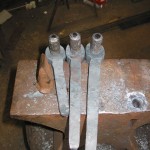 A 30 mm knob is formed on one end of the bar  under the power hammer, and the blank is cut to leave enough material to form the tail. The tail is then drawn out as desired and the knob is flattened to give a seat for the pin, in which a hole is punched to accomodate the tenon of the pins. Tapered tenons are now forged on the 20 mm pins; they are then allowed to cool while the blank is heated up; the hot piece is placed on the anvil or swage block and the cold pin is drive home, expanding the punched hole out to be a tight fit around itself. The pintle is then held securely by the pin, upside down, and the protruding tenon is heated up and rivetted over, thus completely locking the whole arrangement together. It only remains to finish the shank according to whether it will be fixed into masonry or timber.  As can be seen from the main image the pintles in this order are of  different types, some being drawn to a taper and barbed, in order to be driven into timber, while the rest are forged down to a round section and threaded; however, they all share the forging stages shown and described here.