The protection of ironwork from rusting.

Consequent to an unfortunate incident with a bunsen burner I did not study chemistry at school.    Although, with hindsight, this was probably no more than an innocent expression of my enduring interest in fire,  I must therefore leave any in depth analysis of the rusting process to those who know what they’re talking about.

Clear enough, though, is the basic fact that the result of exposing bare steel or iron to the atmosphere in which we live is that it rusts.

How much it rusts depends on both the material –  wrought iron generally performing better than mild steel –  and its’ environment.  Damp environments rust things quickly, and a marine or coastal situation will accelerate the process still further.  To protect ironwork in such circumstances requires serious consideration and effort.  On the other hand ironwork in a dry, sheltered environment may need very little protection . So there are a  range of solutions, according to situation. I can only properly represent our own approach.

Our own default settings for the protection of ironwork are as follows;

Indoors we tend to go for a waxed finish, melting beeswax on to the heated ironwork. This finish brings out the natural colours of forged work and can easily be maintained by occasional application of beeswax or a soft furniture polish such as Antiquax.  Where there is heat  we either use a hi temperature black paint or stove black.

The chandelier below  illustrates well how hot waxing will bring out the colours of the material, – both the reds and browns of the pre rusted plate rings and the blue greys and darker shades of the forged  arms and outer drip tray for the candles. 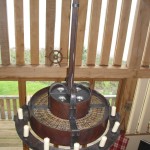 On the same chandelier the plate with the uplighters set into it is painted with a high temp paint with the addition of some graphite powder.

This is a finish that we apply to many of the articles we make that will come into contact with heat;  stoves, firedoors, guards, firebaskets, fire furniture etc. Below is an example of the same process used on a firedoor latch which illustrates well the ‘zing’ you get by adding the graphite powder. (A similar effect can be obtained by the application of stoveblack/grate polish, but this has to be re applied with some frequency) 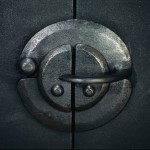 Out of doors our normal procedure is that all components are made and test assembled first. They are then  disassembled – as far as is practicable – so that the subsequent blasting and zincing processes can get in to all the nooks and crannies. If there are places where surfaces have to be pressed or held together at this stage then they are ground off and primed now; 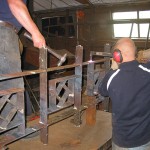 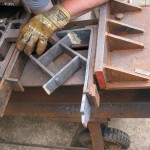 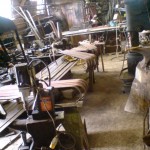 pink primed surfaces prior to assembly 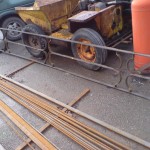 The work is then taken to be grit blasted 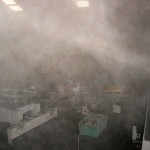 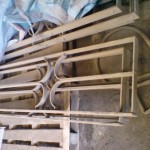 before being hot zinc sprayed. 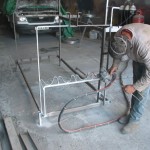 The blasting removes all scale from the iron and gives the surface a grainy texture to which the hot zinc and the subsequent coats of paint readily adhere.

The common alternative to this method – hot dip galvanizing –  is to place the completed work in, firstly, a pickling bath  and then in a bath of molten zinc.  While this is simple and fairly effective it has some disadvantages.

– The pickling bath cannot be guaranteed to remove all of the scale in the way that blasting can; where there is scale the zinc can only stick to the scale and not to the parent metal and so when the bond between the iron and the scale weakens over time – which it will – the coating of zinc in those places is liable to flake off or crack if knocked.

– In the zinc bath the zinc will cover over adjacent surfaces but will not flow in between them; nor will it preserve fine detail; this is often not a problem for fabricated objects  such as five bar farm gates or simple municipal railings, but for work with any degree of detail this tends to be detrimental.

– The finished surface of hot dipped metalwork is generally smooth and shiny. We find that the more textured surface produced by the blast and hot zinc spray process allows for a much more effective and pleasing painted finish.

When the work returns from the zinc sprayers it is tee washed (this ‘kills’ or neutralizes the zinc) while still in its disassembled state; 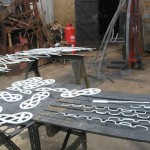 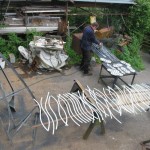 and then primed with, generally, a micaceous oxide primer, prior to assembly by rivetting/collaring or bolting (in stainless or copper) 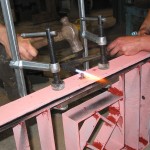 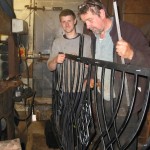 and applying subsequent coats of paint as required. 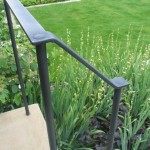 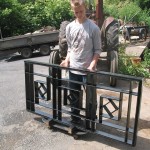 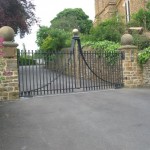 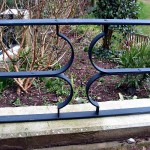 This procedure, while time consuming and quite expensive, provides a very good start in life for ironwork of any description and particularly so for forged work where it is not uncommon for there to be numerous points at which elements touch together to create secret and unpaintable crevices, seams or hollows, which will, without fail, cause problems that are very hard to remedy at a later date.